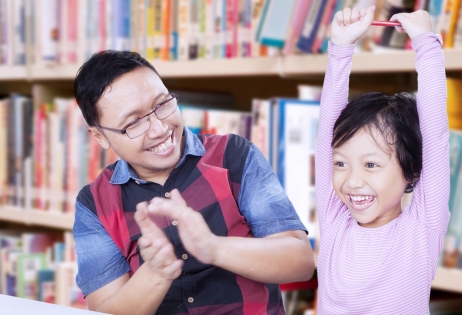 Approximately 5 minutes. Try out this practice whenever you are authentically complimenting and encouraging your child.

The praise we offer our children can influence their motivation—and that motivation can promote either moral or immoral behavior.

When you’re offering sincere praise to your child for progress or accomplishment, rather than focusing on their intelligence, focus on their performance and process—how well they are doing, how effectively they are working, or how creatively they are problem-solving.

For example, instead of saying “You figured it out, you’re so smart!,” try a genuine statement like “You did very well this time!” or “I see how you came up with different strategies until you found one that worked!” Or instead of saying, “You’re a genius!,” try “I noticed that you stayed on task that whole time even though the problem was tricky!”

That way, children won’t feel pressure to lie or cheat in order to uphold their reputation for being smart.

Lying is common in childhood. The ability to tell a lie is actually a sign that a child has achieved important developmental milestones, including understanding that others can have different beliefs from their own, and being able to flexibly maneuver conflicting information in the mind. Although we shouldn’t be too alarmed by our young children’s lies, being mindful of the way we praise them can promote honesty as they get older.

Dishonest behaviors such as lying and cheating can lead to conflict within families, as well as further trouble at school. Honesty is a foundation for trust and for healthy, meaningful relationships. Being honest can also lead to increased feelings of confidence and competence when children recognize that they are capable of completing tasks without resorting to cheating or cutting corners.

Praising process promotes what researcher Carol Dweck refers to as a “growth mindset” rather than a “fixed mindset.” This has other benefits for children, as well: Because they believe that their skills and knowledge can be developed when they work effectively, they are more motivated to learn and resilient in the face of challenges.

Children aim to uphold their reputation. Studies have shown that praising children’s intellect or telling children that they have a reputation of being smart encourages them to cheat in order to uphold this reputation. Children may be anxious that if they don’t succeed, others will judge them negatively and it will mean that they're not as smart as the other kids.

In contrast, praising children about their process can reduce cheating because a child will work to uphold their reputation for putting in a good effort and working effectively. Praising process ultimately leads to more honest actions in your child.

Children playing a guessing game were split into three groups: The first group was praised for their ability (“You’re so smart”), the second group was praised for their performance (“You did very well this time”), and the third group did not receive any praise. Children who received praise for being smart were more likely to cheat during the game compared to children who received performance praise or no praise.

Use pretend play to encourage children to persevere through difficulty.

Teach kids how to practice to help them achieve their goals.