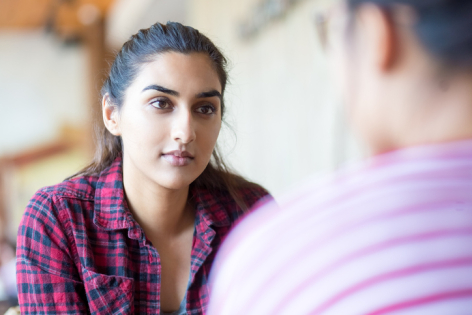 At least 10 minutes. Try to make time for this practice at least once per week.

Find a quiet place where you can talk with a conversation partner without interruption or distraction. Invite this person to share what’s on their mind. As they do so, try to follow the steps below. You don’t need to cover every step, but the more you do cover, the more effective this practice is likely to be.

Often we’ll listen to a conversation partner without really hearing them. In the process, we miss opportunities to connect with that person—and even risk making them feel neglected, disrespected, and resentful.

This exercise helps you express active interest in what the other person has to say and make them feel heard—a way to foster empathy and connection. This technique is especially well-suited for difficult conversations (such as arguments with a romantic partner) and for expressing support. It may also help facilitate constructive conversations across political, cultural, or other differences; however, studies have found that, when there's a power imbalance between people of different groups, it's more important for the person with less social power to give their perspective while the person with more social power listens and tries to take their perspective. Research suggests that using this technique can help others feel more understood and improve relationship satisfaction.

Active listening helps listeners better understand others’ perspectives and helps speakers feel more understood and less threatened. This technique can prevent miscommunication and spare hurt feelings on both sides. By improving communication and preventing arguments from escalating, active listening can make relationships more enduring and satisfying. Practicing active listening with someone close to you can also help you listen better when interacting with other people in your life, such as friends or co-workers.

A group of mostly young, white, female college students had brief conversations (about their biggest disappointment with their university) with someone trained to engage in Active Listening, someone who gave them advice, or someone who gave simple acknowledgments of their point of view. People who received Active Listening reported feeling more understood at the end of the conversation.

One study paired Mexican immigrants with white Americans, while another paired Israelis with Palestinians. In both studies, each member of the pair was asked to share their perspectives on the difficulties of life in their society, and to take the perspective of the other person when they were sharing their views. This dialogue significantly improved participants’ attitudes toward the other group—for instance, they felt greater empathy for their suffering, trusted their intentions more, and felt more warmly toward the group as a whole. However, for members of the pair with less social power (Mexican immigrants and Palestinians), attitudes toward the other group improved more after they gave their perspective than after they took the other person’s perspective.

For people with less social power, it is sometimes more important and beneficial to share your perspective than to listen to people with more power. In a study that examined discussions between pairs of ethnic minority people and white people, white partners benefitted more from empathic listening than their minority counterparts. No matter the ethnicity of their partner, white partners improved in their ability to focus, while partners of color worsened in their ability to focus and Black partners reported feelings of disempowerment, when listening.

Active Listening involves approaching a conversation with a genuine desire to understand the other person’s feelings and perspective, without judgment or defensiveness. When you engage in Active Listening, you tune into what your conversation partner is communicating with their words and body language. How well do you feel and understand what others are feeling? Take the Empathy quiz to find out.

Avoiding The “Four Horsemen” in Relationships

How to overcome barriers to kindness in yourself and others.