How to overcome barriers to kindness in yourself and others. 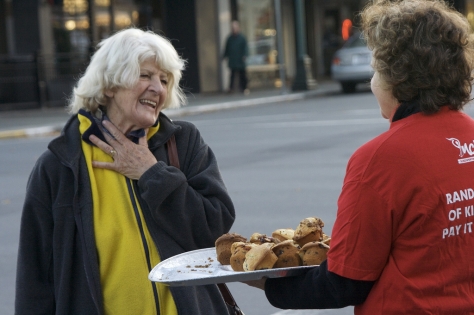 How long this practice takes you will vary depending on which strategy you choose, but make it a goal to follow one of these strategies at least once a month.

Below are three different strategies that are effective at encouraging kindness and generosity. You can try them individually or in combination with one another. Click on the link at the end of each strategy for more detailed instructions on how to perform it.

There are many different creative ways that you can put these principles into practice. We encourage you to share your experience with them in the Comments & Reviews section below.

Research suggests that humans have a strong propensity for kindness and generosity, and that kindness improves the health and happiness of the giver, not only of the receiver. We’ll often be kind to others even at a cost or risk to ourselves—the definition of altruism. But we don't always act on our altruistic instincts—barriers can get in the way.

Fortunately, studies have also identified ways to overcome these barriers to altruism. Here are three research-based strategies for eliciting altruism from yourself or others.

Although people generally want and try to be altruistic, other concerns—such as feelings of competition or allegiance to an “in-group”—sometimes stand in the way. Reminding people to think about social connectedness, see victims as real people rather than abstract statistics, and feel a sense of common humanity can help them overcome some of the obstacles to altruism and allow feelings of care and compassion to shine through. These techniques can all trigger the caretaking impulses that seem to be part of humans’ evolutionary heritage.

People who read words associated with human connectedness were more interested in volunteering for a charity and were more likely to donate money to a charity; similarly, people who wrote about a time they felt a close bond with someone else expressed greater intentions to help others in general.

People were more willing to compensate individuals who had lost money when the identities of those individuals were revealed, and they donated more to a charity when they knew that their donation would benefit a specific family that had been selected from a list.

People were more likely to help a fallen jogger when the jogger was a fellow fan of the same soccer team than when the jogger was a fan of a rival team (as indicated by their shirt). But when people were reminded of a shared identity with the fallen rival (being a soccer fan), they were more likely to help that person than they were to help a non-fan.

The strategies in Eliciting Altruism can help you increase your bandwidth for generosity. How kind and helpful are you? Take the Altruism quiz to find out:

Say “We” to Nurture Collaboration in Kids

Use language to help orient kids toward cooperation.

Recalling how others have comforted us can make us more compassionate.