Use language that sparks helpfulness in children. 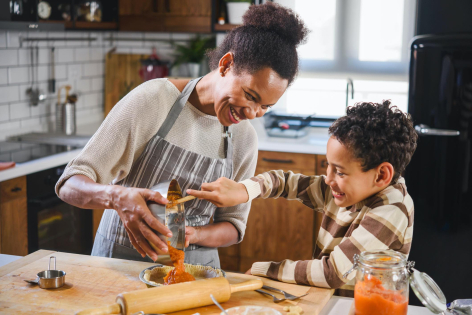 This practice can take as little as 5 minutes.

Children begin to voluntarily help others early on in life—even before they can say their first words. The way you talk to your child can kindle their capacity to be helpful.

The typical advice is to invite kids “to be a helper.” But you might choose to use different language depending on children’s past experiences and how big of a challenge they face.

Children who have faced prior failures or setbacks when trying to help might be reluctant to try again if they’re not sure they’ll succeed. In these circumstances, you can inspire them to persist by talking to them about choosing “to help” rather than “to be a helper.”

Children can experience failure and mistakes when helping in their daily lives, like when they try to serve others water out of a pitcher and it spills, or they try to help wipe a table and end up pushing crumbs onto the floor. They can be sensitive when they fall short of their intentions and can interpret their shortcomings as suggesting that they don’t have what it takes “to be a helper.” They can identify as a “bad helper” or even a “non-helper” and be averse to trying again.

Inviting them simply “to help” might help them overcome these misgivings and persist at kind, helpful behavior. By trying to help others, your child can build up their positive interactions and strengthen their social connections. School-age children who engage in kind acts are more well-liked by their peers and have improved well-being. The benefits of kindness are even seen as early as toddlerhood—young children are happier when giving to others than when receiving.

Talking about children’s behavior by encouraging them to identify with the category of “helper” may backfire, by planting a seed of doubt in them about whether they are really helpers after all.

In contrast, talking to your child about an action—choosing “to help”—may encourage them to see a challenge as a learning and growing opportunity. Nurturing helpfulness in your child in a gentle, low-stakes way when the outcome is not clear may detour them from focusing on the possibility of failure and questioning their competence.

Children between four and five years old were randomly assigned to hear researchers talk to them about helpfulness using “to help” language or “to be a helper” language. Next, the researchers surreptitiously rigged the children’s experiences with helping so that they failed in their attempts (for example, when children tried to put away a box of toys, the contents fell out because the bottom was loose). Then, the children had three more opportunities for helping without being explicitly asked, some of which were designed to be a little hard. While children in the “to help” group persisted in helping regardless of how difficult the scenarios were, children in the “to be a helper” group helped less when faced with more difficult scenarios.

Parents are role models for their children's helpfulness. Are you a generous giver? Take our Altruism quiz to find out.

How your conversations with adults can encourage generosity in your children.

Making art about kindness inspires kids to be caring and generous.

Music to Inspire Kindness in Kids

Make music together to encourage generosity and helping in young children.