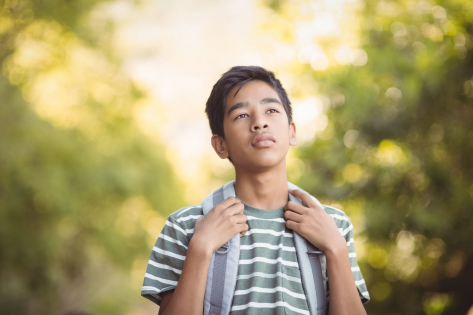 This practice can be done at regular intervals when parents want to help their teens cultivate humility. It can take as little as 15 minutes or as long as 45 minutes.

Humility is about being able to see and accept your strengths and limitations without defensiveness or judgment, as well as being open-minded to other’s perspectives and to new information. This practice can help teens bolster their humility in that second sense—by orienting them toward others and helping them become more flexible and adaptable.

In one study, this exercise helped college students as young as 17 years old cultivate humility when they did it on their own as part of a workbook. For younger teens, parents can help by providing both examples and encouragement. You can model how to do the exercise in front of your teen—reflecting on your own life—and encourage your teen to try it with you.

You can have this conversation with your teen during dinner, your commute, or a nature hike. You might write your reflections as letters or emails to each other, or your teen can do it privately in their journal.

As children grow, they become better able to notice and appreciate humility, making them gravitate toward others who are humble. But in the age of social media, older children and teens can be bombarded by social pressure to self-promote and be self-absorbed. Humility offers a buffer against this.

Humility is also a common trait in purposeful young people, suggesting that it might support children in achieving their long-term life goals. Over time, children who grow into humble adults will tend to have stronger relationships and better health.

This practice helps teens (and parents) increase their awareness of the thoughts and feelings that humility evokes and encourages them to imagine acting with humility in the future.

When parents model thinking and acting with humility, teens learn what it means to work toward becoming humble. Ultimately, that involves shifting your orientation away from your own desires and perspectives and toward others.

Researchers randomly assigned college undergraduates to either a workbook with humility exercises, including the reflections in this practice, or alternative workbooks about forgiveness, patience, or self-control. The study found that participants in the humility group were more humble and had fewer negative emotions after the humility exercises compared to the other groups.

This chapter reviews programs that have aimed to help increase humility and the current limitations of the science around helping people become humble. The authors review the humility workbook activity and the science behind it.