Help children understand what it means to forgive. 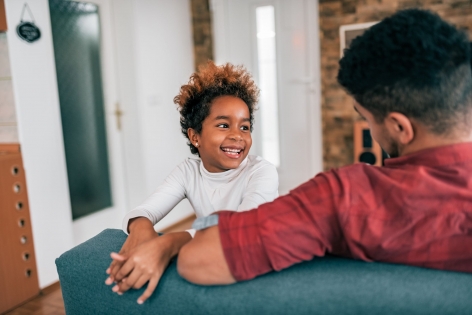 These steps gradually help children contemplate forgiveness by building their understanding and skills over time. Parts of this practice, such as reading a picture book and talking about it, can take as little as 15 to 20 minutes.

Psychologist Robert Enright, Ph.D., and psychiatrist Richard Fitzgibbons, M.D., define forgiveness as responding to unfair, hurtful treatment by abandoning resentment and cultivating beneficence, including feelings of compassion or acts of generosity. Forgiveness doesn’t necessarily include condoning, excusing, tolerating, or forgetting the behavior, nor accepting an apology or reconciling with the offender. It's simply a personal choice to let go of negative feelings and cultivate more positive ones.

In researching forgiveness for over three decades and implementing forgiveness programs for both adults and children throughout the world, Enright suggests how to begin to talk about forgiveness with your young children:

Starting at about age six, children can understand the causes and effects of people’s actions. Because of this advance in reasoning, you as a parent now can begin to systematically introduce them to the idea of forgiveness. There are five sequential steps you can take to help young children become rather sophisticated in their understanding and practice of forgiveness.

Because these steps require time, they should be continued for the next several years, using new stories so that the learning deepens in different contexts.

Children will sometimes be hurt or betrayed by other children (or adults). You can teach your children about forgiveness to help them envision the possibility of a peaceful path forward and healing after wrongdoing.

Children and teens who learn about forgiveness tend to be more forgiving, hopeful, and empathic. They are less likely to feel anger and depression, act with aggression, and perceive others as hostile. Apart from better emotional well-being, young people who forgive also tend to perform better academically.

Forgiveness is a difficult and complicated process, even for adults. These steps provide a roadmap to help your children understand and navigate it, if they choose to. They begin with concepts that are related to forgiveness and easier for kids to understand, eventually building up to an attempt to forgive.

Forgiveness offers children a way to think about what to do after someone wrongs them, and to potentially get relief from intense hurt and negative emotions like sadness, anger, resentment, and the desire for vengeance.

First- and third-grade children who participated in a forgiveness program led by school teachers and psychologists felt less negative emotions like anger and depression, and were more forgiving toward those who had previously hurt them, compared to children who did not participate in the program.

This comprehensive book for researchers and clinicians outlines the science behind forgiveness, provides guidance on how the process of forgiveness can offer healing, and explains how to support children and adults in forgiveness therapy.

Parents are also role models for their children's forgiveness. How forgiving are you? Take our Forgiveness quiz to find out.